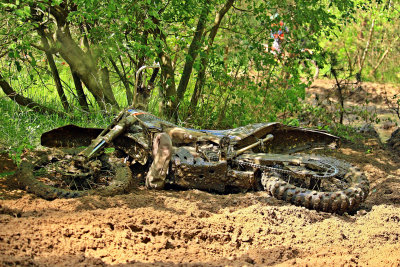 It's something that will happen to every dirt bike rider eventually. You'll kick and kick until your foot hurts, but your bike just won't start. If your dirt bike won't start it's likely something fairly simple to fix, so we'll look at all of the possible causes below.

My dirt bike won't start: The first things to check

Is the fuel tap open

If you're new to dirt bikes you may not realise that there is a fuel on/off tap on the fuel tank. Simply turn the tap to the on position when you're ready to start the engine, and be sure to turn it off as soon as you've finished riding.

It's rare, but fuel taps can get blocked with gunge, or mud that's found its way into the tank. For this reason, it's also worth pulling the fuel pipe off the tap to make sure fuel is actually coming out of the tank.

If the dirt bike has been sat for a while not being used, there's a chance that the fuel has gone bad in the tank. If it's been sat for anymore than about 6 months, it's worth draining the tank and adding some fresh fuel.

If your dirt bike has a carburettor, you should also drain all of the fuel from it before you continue.

Tip: to prevent fuel going bad, always keep it in a sealed can. If the fuel remains in the dirt bike's fuel tank, it will be exposed to moisture in the air, and evaporation of its volatile components will occur.

Old fuel will cause more problems with dirt bikes that have a carburettor. This is because the fuel is not a fine mist as it exists the jets, and it requires the low volatile part to provide the initial combustion.

On the other hand, fuel injected dirt bikes will turn the fuel into a very fine mist, which is enough for the old fuel to ignite.

Another common beginner mistake is to try starting the engine without opening the choke. If your dirt bike has a carburettor then it'll need some chock to start, especially in colder conditions.

To check the spark you will need to remove the park plug. Or if you're brave you could grab hold of the spark plug boot while you kick the bike over. If it hurts and makes you scream you have a spark! That was a joke, don't do that! I've done it and it's not nice.

When you have the spark plug removed, simply place the threaded part against a bolt on the cylinder head. It needs to be contacting metal for this to work. Turn the bike over by kicking it, or with the electric starter, and you should see the plug sparking.

If there's no spark then the first thing to do is to try a new spark plug. If the new plug sparks, put it back in and try starting the engine. If it doesn't spark you could have a more serious problem.

Problems related to no spark:

It's nearly impossible to stop fine dust entering the carburettor, even with the best air filters, and these small particles can easily clog up the tiny holes in the jets. A blocked jet will prevent the engine starting, so remove the carb and blow out all of the jets with compressed air.

While the carburettor is off, you can check the reed valve at the same time. A broken reed can prevent the engine starting, and they should be checked regularly anyway, so now is a good reason to check them.

Clean around the sealing edge, and check for gaps around the petals. Look for splits, and cracked edges, and make sure the rubber manifold is in good order.

A blown gasket will let too much air into the cylinder and prevent starting. Check the cylinder head, and base gaskets for signs of blowing. This will usually be a sooty mark or oily leak.

Also check the reed valve gasket, and check that the carburettor's rubber manifold is sealing. It's also possible for the spark plug to leak if it isn't sufficiently tightened, check that it's tight, but be sure not to over tighten it.

Just like carburettors, fuel injectors can also get gummed-up! It is rare for them to suddenly stop your dirt bike starting, but if you've tried everything else on this list then it's time to clean them.

It will be impossible to clean them without a cleaning kit, so you'll need to get one. Motion pro do the best cleaning kits, and you can get one on Amazon here > Motion Pro Injector Cleaning Tool.

Motion pro do a fantastic compression tester (link to amazon), that will diagnose a problem within seconds.

Even if the rings aren't broken, a compression test will let you know when it's time for a rebuild, so it's worth having a tester. if the compression test reads anymore than 20 percent lower than the baseline, the piston and rings will need replacing.

Find out how to rebuild a 2-stroke engine HERE.

I've had 2 dirt bikes that have blown the crankshaft seals out, so this could be your problem. If the seal is blown on the flywheel side, there will be no other symptoms, so remove the stator and check the seal.

If it's the seal on the gearbox side you'll have oil leaking into the cylinder. You may see this by looking up through the exhaust port. If there's more oil on the piston than normal you may have found your problem, and you will need to replace the seal.

This post covers the most common faults with dirt bikes, if your dirt bike won't start after trying everything on this list, it's best to take it to a repair shop for further advice.