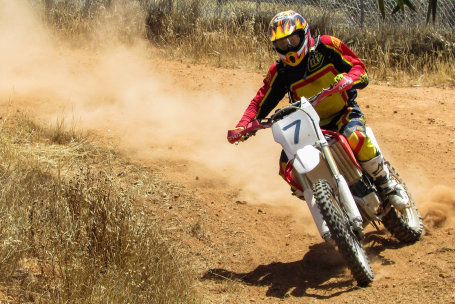 If you're new to the wonderful world of dirt bikes, learning everything you need to know can be a little overwhelming. To make things a little easier for you, I've put together 24 dirt bike facts to explain the basics and expand your knowledge.

Dirt bikes are made to win races, so they need to be as light as possible. Considering their size, and the fact that they have hundreds of parts bolted to their frames, dirt bikes are actually very light.

The weight of a 125 cc 2-stroke is just 190 lbs, which is achieved by using aluminium frames and wheels, plastic fenders and panels; and by leaving out anything that isn't completely necessary. Some manufacturers are also using carbon fibre composite subframes which further reduce the weight of their dirt bikes.

To win races, dirt bikes also need to be as fast as possible. The power, acceleration, and top speeds will vary between models and engine sizes, but even kids bikes can be very fast. The fastest dirt bikes will be the adult 450 4-stroke and 250 2-stroke motocross race bikes, which will clock 0-60mph in under 5 seconds!

3. Dirt bikes can be used on highways

Not all dirt bikes can be used on highways, but there are lots of models that are road registered and fully legal. To make a dirt bike road legal, manufacturers add lights, direction indicators, speedometer, road legal tyres and exhaust system, a spark arrestor, and more. This all adds to the weight of the dirt bike, so road versions will always be heavier.

The first time you see a dirt bike you'll notice how tall it is. Dirt bikes need to be tall in order to achieve large amounts of suspension travel. Modern dirt bikes will have between 12 and 13 inches of travel on both front and rear suspension. This makes for a smoother ride, and softer landings from huge jumps; putting less strain on the dirt bike, and the rider.

5. Dirt bikes are easy to maintain

Dirt bikes are easy to maintain, meaning you can carry out repairs and maintenance by yourself in your garden shed. Certain jobs will need special tools, but you can buy everything you'll need online, and there are plenty of video tutorials to help you out on YouTube.

There are repair shops that will do the work for you, but expect to pay big money. Doing dirt bike repairs and maintenance yourself is not only cheaper, but it's also good fun!

Dirt bikes need to be super strong to cope with the huge amounts of stress placed on them during a race. Supercross riders regularly jump 70 feet, and the forces the bike experiences upon landing are enormous.

As we've already discovered, the suspension will help to absorb some of these forces, but the frame, wheels, handlebars, and swingarm still need to handle a lot of abuse. Thick aluminium with a small amount of torsional flex is used on most modern frames, and large steel bolts hold everything together.

7. Riders have a choice of three different motors

2-stroke dirt bikes provide the best power to weight ratio, meaning they're light and powerful. They're also very easy to maintain, cheaper to buy, and spare parts are cheap. Their downfall is high emissions, which has lead many manufacturers to stop producing them.

But KTM have given the 2-stroke new hope, by producing a fuel injection system which cuts fuel consumption, and lowers emissions to meet Euro 4 and 5 emission requirements. The technology is very new, but expect to see more and more 2-strokes reappearing!

All of the top manufacturers have a 4-stroke dirt bike range, and because of their smoother power delivery, they may be more suited to beginners. But bare in mind, because of their complexity, they are harder to maintain.

Electric dirt bikes are still very new to the game, but they're proving to be a very worthy competitor. Offerings from Alta are producing 50 horsepower, with a battery life of up to 2 hours. Top riders are winning competitions on them, and they're getting fantastic reviews.

There's no emissions, very little noise, and no engine maintenance, but batteries will eventually need replacing. There's also no gears, which makes them an excellent choice for beginners.

8. There are lots of dirt bike manufacturers

Although there are lots of dirt bike manufacturers, only a few really stand out. The British made BSA dirt bikes dominated the scene for decades, until the Japanese took over in the 1970's. Japanese made Honda, Yamaha, Kawasaki, and Suzuki dirt bikes are still leading the way, and are the top choice for riders worldwide.

Austrian manufacturers KTM are also big players in the motocross and enduro world. Husqvarna models have also become very popular since they were bought by KTM back at the start of 2013, with 2-stroke, 4-stroke, and electric dirt bike offerings.

Dirt biking is not only extremely fun, but it's also a good form of exercise. You'll work out your muscles, improve your cardiovascular health, and stimulate brain activity. Ask anybody who has competed in any form of dirt bike competition, and they will tell you that it's the best workout you will ever have!

10. There are lots of things you can do on a dirt bike

Dirt bikes can do more than just ride fast along the dirt. When you have a dirt bike you'll be able to choose between motocross racing, enduro competitions, trail riding, freestyle motocross, fun riding, and more. 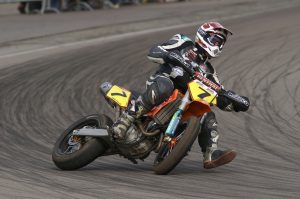 Dirt bikes can even be adapted for road / dirt racing, known as supermoto. These dirt bikes are fitted with smaller wheels, and road tyres. Races will alternate between tarmac and dirt, with 50-75% of the course being tarmac, and the rest being dirt, with jumps and obstacles similar to motocross tracks.

Thanks for checking out these dirt bike facts, I hope that you've found it helpful! If you're new to dirt bikes, you can also check out these posts:

A dirt bike sizing guide that important for all beginners

Top tips for all new riders

Or check out all of the gear you will need to start riding dirt bikes here!