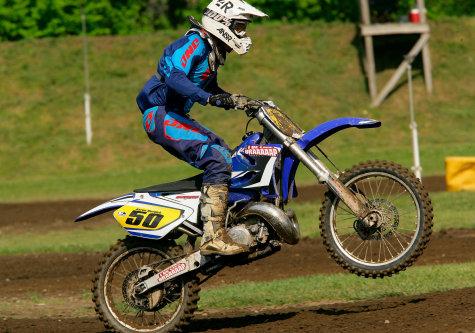 So what's the best 2 stroke premix oil to keep your dirt bike happy?

There's lots of choice when it comes to oils, and every manufacturer claims to have the best product. From personal experience, and after years of testing different brands, I can tell you that a lot of these manufacturers are telling porkies!

In this post I'll tell you which oils to avoid, and why. You'll find out exactly what to look for to ensure you're getting a quality 2 stroke oil, and we'll also look at 6 of the top riders choices.

Cheap 2 stroke oil: why you should avoid it

When I started riding dirt bikes as a kid, I used a lot of cheap 2 stroke oils. I also changed my bike every 6 months, so I had no idea what these oils were doing to my engine in the long term.

I used cheap oils for around 4 years, until I bought a 2 stroke road bike, that I decided to keep. After riding the bike for a few months I started to get a few engine problems:

Luckily I spoke to a guy at the local bike shop who told me that the carbon build up was likely caused by the cheap oils that I'd been using. I rebuilt the engine, and started using a quality oil. Regular checks revealed very little carbon build-up, and the bike ran fine until I sold it.

What other problems can cheap oil cause?

The bike I just mentioned suffered serious pre ignition due to the carbon build up in the combustion chamber and on top of the piston. Preignition is a serious problem that will cause the engine to overheat, and eventually melt.

I never experienced this, but many people complain of their carburettor getting gunged up. This blocks jets, and eventually leads to the engine quitting. This could also lead to a weakened mixture, which will also melt your piston.

A carbon clogged exhaust can cause an excessive amount of back pressure inside the cylinder. This can blow out the base gasket, and lead to an air leak, which will then cause a weak mixture and a melted piston.

Cheap 2 stroke oils will tend to have a higher flash point, this is why they don't burn away under lower temperatures. So if you're doing a lot of enduro or trail riding where the bike if not revving so high during technical sections, you'll get a lot of spooge. This will collect in, and drip from your exhaust, and spray out all over your fender.

We've discovered that the cheap stuff is definitely not the best 2 stroke premix oil to use in your dirt bike, but even higher priced oil can be of poor quality. For this reason, it's best not to judge a 2 stroke oil simply by its price.

So how do you know if the oil is good quality?

The best way of knowing that you're buying a quality 2 stroke oil is by checking the bottle and looking for a JASO rating. A JASO rating shows that the oil has passed strict quality tests, which you can read about here. These test include lubricating ability, cleanliness, smoke potential, flash point, etc.

The JASO rating will be printed on the bottle, usually on the back. Or you can find it online before buying the oil. The ratings range from FA to FD, with JASO FD being the highest quality. 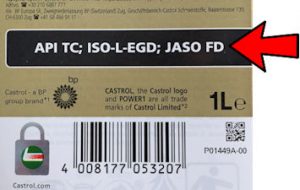 Without a doubt one of the most popular oils to see at the track is Motul 800. Motul claim that this oil exceeds the current JASO FD standard, and that it has one of the best lubricating formulations available.

Motul 800 is ester based, which gives it the added benefit of offering better protection the hotter the engine gets. This happens as the molecular bonding process is heat activated, this makes these oils superior.

The flash point of Motul 800 makes it perfect for high revving motocross bikes. If you ride at lower revs for trails, trials, or enduro, you should choose Motul 710 in the list below.

Check the current price of this awesome oil on Amazon by clicking HERE.

When I started racing, Castrol TTS was the top choice for all of the best riders. This can still be found under the name TTS in some countries, but Castrol updated the name to Power 1 racing in 2012. Be sure to buy 2T because Castrol also do the 4 stroke version which looks identical, and has tricked me before!

Castrol Power 1 Racing is JASO FD and API-TC rated. It's also passed ISO-L-EGD testing, which is very similar to JASO FD requirements. The oil creates a rapid combustion of the mixture to provide the rider with an excellent throttle response. This oil can be used as premix, or for bikes with their own lubricating system.

See the current price of Castrol Power 1 Racing on Amazon by clicking HERE.

Another super popular oil in the racing world, aimed specifically at dirt bike riders, and it smell is unmistakable. As you may have guessed it's Castor oil based, Castor oil is known to offer better protection under extreme conditions

Maxima Castor 927 is designed to ensure maximum performance under the most severe conditions, and it will keep your engine running clean and free of gum formation. It's designed for premix only, and is not intended for use in oil injection systems.

There's no JASO rating, but that's not always a bad thing, it just means that the manufacturer hasn't paid for the testing. Just a quick google search gave me a bunch of threads where riders were bragging this oil up after years of testing, that's why it made the list!

Check out the awesome Maxima Castor 927 reviews, and see the current price on Amazon HERE.

Silkolene comp 2 is another ester based formula, designed for both both premix and injector systems. This oil has passed both JASO FC and JASO FD testing, and also meets API TC and ISO L-EGD requirements. A top rated oil designed for low smoke, low ash, and is environmentally friendly.

Silkolene are also making comp 2 plus which is designed as an ultra low smoke, clean burning lubricant. These are both great choices for use in your dirt bike, and they're also highly recommended for use in cold weather due to them having a low viscosity.

Check the current price of Silkolene Comp 2 on Amazon HERE.

A very similar ester based oil to the previously mentioned Motul 800, but Motul 710 has a lower flash point. This makes it ideal for riders who are spending more time riding at lower RPM, compared to a motocross bike that will be ridden at maximum RPM for long periods.

This lower flash point means excess oil will not be blown straight out of the exhaust and wasted. It will also burn as intended and prevent carbon build-up at lower revs.

A couple of examples of who this oil would work well for, would be more technical riders, or beginners who are still learning the basics.

This oil is JASO FC and JASO FD certified, and it meets API-TC, and ISO-L-EGD standards.

Check out this top rated oil on Amazon by clicking HERE.

Another excellent oil from Silkolene, their Pro 2 formula has been developed alongside grand prix and international racing teams. They're so confident in the oil that they recommend just a 50:1 (2%) mix. This obviously shows quality, but it also means that you will use less oil, saving you money!

Recommended for all dirt bike engines, it's ester based and utilises aerospace technology to provide superior lubrication. This oil maintains a strong film strength at high engine temperatures. This provides the latest racing engines with the outstanding load-carrying and cleanliness requirements, necessary for full power output even at high fuel to oil ratios.

Check the current price of Silkolene Pro 2 on Amazon HERE.

Which 2 stroke oil to choose

All of the oils listed are highly rated, and have been tested and time proven by top racing teams. The oil you choose will depend entirely on the type of riding you are doing.

For example, a higher flash point will be better suited to motocross racers who are riding at a higher RPM for long periods. This means the oil will stay where it's needed, and it won't burn away prematurely.

A lower flash point will suit technical riders who aren't required to rev their engines as much. This means the engine is running at a lower RPM which results in lower combustion temperatures being reached. A high flash point oil will not burn as effectively and will result in a lot of waste, and unwanted carbon build up, so an oil like Motul 710 is perfect.

Each oil will have something different to offer, so look at the manufacturers description, data sheet, specifications, etc, to help you decide which is best for you.

Just to note, you should not mix the castor-based oils with the ester based oils in one pre-mixing. And don't run the castor based oils when temperatures are below freezing.