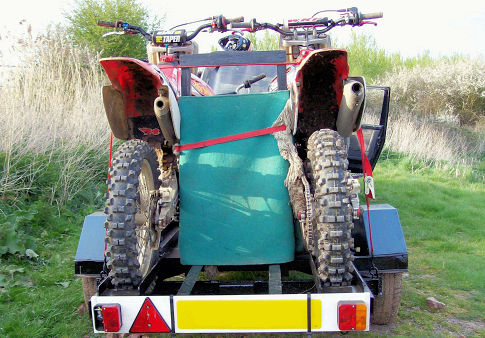 So you've got your dirt bike, but now you need a way of getting it to the track. There's various ways to transport a dirt bike, and in this post we'll look at 4 of the best options. Whether you drive a car, truck, or van, you'll find everything you need to know below!

1. How to transport a dirt bike with a car 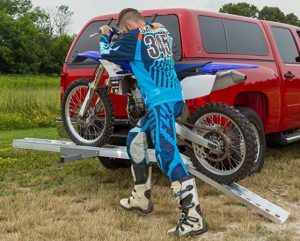 This is probably the cheapest way of transporting a dirt bike, and is the perfect solution for those who don't wish to buy a van. You simply use a dirt bike carry rack like the one pictured above, which you can check out on Amazon here > Dirt Bike Carrier.

These carriers attach to your hitch receiver with a single pin, and can be fitted in seconds. They can be fitted to any size vehicle, and even have a loading ramp so you can easily mount your dirt bike.

If you're handy with a welder it's possible to make your own rack, I've made my own in the past. But to be honest, the price of these are so cheap it really isn't worth the effort. These have also been tested to 400 lbs, so you know your bike is safe back there.

The rack pictured fits all bike sizes from 50 cc up, and is also available as a double carrier. This means you can mount two bikes to the back of your vehicle, and take a friend along to the track with you.

You'll need some good tie down straps to keep your dirt bike safe during transport. Ratchet straps are perfect, and they make securing the bike quick and easy. It would be devastating to see your bike fall off and get crushed by the truck that's following you. So avoid using the cheap ratchet straps, as these aren't rated to support the weight of a dirt bike.

These rhino tie downs (link to Amazon) are designed to transport motorcycles, and are rated to over 5000 lbs, so they're perfect for the job!

When the bike is on the carrier, and before you tighten the straps, you should also place a fork saver underneath the front mudguard. We'll look at these in the last section.

One last thing to note about this method is that the vehicle's number plate, lights, and direction indicators can be obscured by the dirt bike. If this is the case then you will need to attach some kind of lighting board to the dirt bike. This will keep the vehicle road legal, and prevent anyone crashing into the back of you because they didn't know you were braking.

2. Transport a dirt bike with a trailer 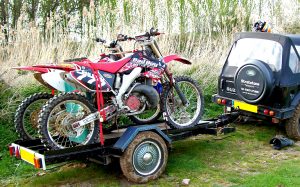 Your second option is a dirt bike trailer, and you have two choices.

1. Buy a standard trailer and adapt it the carry dirt bikes

The trailer that you can see above started off life as a farm box trailer. We cut the sides off, added channelling to stop the wheels moving around, welded on some uprights, and bolted some tie down hooks to the sides.

In all this ended up costing us around £350 ($450), including the trailer, but it took a few days to adapt it. This is a good option for those handy with a welder; this trailer was built about 14 years back, and is still going strong!

Dedicated dirt bike Trailers are widely available now and the price has dropped considerably. It's easier to buy one, but you will spend a lot more than building your own or adapting an old used trailer.

With the higher availability of bike trailers, the price has dropped considerably since we built ours, but they are still pricey. If you have plenty of money to throw at transportation, then a new trailer will be great. But with the low cost of a carry rack, I would definitely recommend a carrier over a trailer, after all, they do the same job!

Strapping dirt bikes onto a trailer

All trailers will vary, but they will all have multiple anchor points, and some will have uprights that you can also strap the dirt bike to. If you find that your trailer doesn't have enough anchor points, or if you build your own trailer, you can get on Amazon and buy heavy duty tie downs that simply bolt on.

Place the tie down straps (the ones linked in the first section are recommended) around the handlebars, pulling down and away from the bike in both directions. This will secure the front of the bike.

You'll want to place a fork saver under the mudguard before tightening the straps, see the last section for more on these.

To secure the rear of the dirt bike, attach the straps to each side of the trailers anchor points, and up over the seat. The bike is mainly held by the front straps, so this strap doesn't need to be super tight, just enough to stop the rear of the bike jumping off the trailer. Over-tightening this strap could damage your seat cover, so be careful.

You can also secure the bike to the upright post if your trailer has one. When the bike is secured, give it a pull in all directions to make sure it's safe.

3. How to transport a dirt bike with a pickup truck 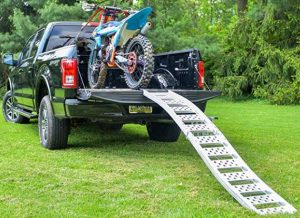 To transport a dirt bike using a truck, there's a few things that you'll need to help you get the bike into the truck, and to keep it there:

To get the dirt bike into the truck you'll need a loading ramp. If you try to do it without a ramp it's easy to drop the bike, or scratch and damage the truck. Bigger bikes are also too heavy to lift in and out by yourself.

Look for a folding ramp like this one that's pictured above (Link to Amazon). Folding ramps make it easier to push the bike up, as the ramp can be longer, meaning there won't be as much slope.

When you put the ramp onto the truck, you will also need to secure it with a strap, as it's common for the ramp to slip off. Use a ratchet strap to secure it to any solid fixing point on the truck, anywhere beneath the tailgate.

When the bike is in the truck, a wheel chock will prevent the wheel sliding around as you drive over bumps, which could loosen the straps. You can find wheel chocks on Amazon, which simply bolt down to the bed of the truck. The chock will typically be placed so that the bike sits dead centre.

The tie down straps linked in the first section are recommended, as they are designed to hold the weight of a dirt bike.

With the wheel (s) in the chock, you can now use tie down straps to secure the bike. The straps should be placed over the handlebars on both sides, pulling down, and away from the bike. They can then be connected to the anchor points in the truck and tightened.

Don't forget to place your fork saver under the mudguard before tightening the straps (see the last section).

Many riders will only strap down the front of the dirt bike, but this leaves the back free to jump around over bumps. So ratchet straps can be looped around the swingarm, and secured at the truck's anchor points, pulling in both directions.

4. How to transport a dirt bike in a van

Getting your dirt bike into a van can be difficult, so a loading ramp just like the one in section 3 above will be perfect for the job. Again a folding ramp will make things easier as they are longer, which makes them less steep than a ramp that doesn't fold.

Don't forget to strap the ramp to a solid point underneath the van to stop it slipping off.

When the bike is in the van, you should never secure it against the side of the van. We once made this mistake, and the levers and handlebars pushed dents into the sides of the van, which could be seen from the outside!

The best option is to use a wheel chock (or two), bolted to the floor of the van. This will keep the dirt bike in place, and stop the wheels sliding around. You can then use ratchet straps to keep the bike upright, by attaching them to the vans anchor points.

If your van doesn't have anchor points, you can get some heavy duty tie down rings from Amazon, to simply bolt to the floor of the van.

When the bike is sat in place with the wheels in the chocks, you can place the ratchet straps over the handlebars and fixed to the anchor points. Place a strap on each side, pulling down and away from the dirt bike in both directions.

Don't forget to put a fork saver underneath the mudguard before tightening the straps, covered in the next section.

If you're using a wheel chock on the back wheel, you won't need any more straps. But if not, the back wheel can slide around and loosen the straps. To solve this problem, a strap looped around the swingarm, and attached to the anchor points on both sides, will stop any movement in transit.

Look after your suspension when transporting your dirt bike

I've mentioned using a fork saver for each method of transporting your dirt bike for three reasons.

1. With each method of transporting you will be using tie downs that pull down on the forks. I've never experienced it, but many riders have complained about fork seal blowouts. Using a fork saver can stop this by preventing fork compression during transport.

2. Tie downs will compress your suspension for long periods which can weaken the springs over time. Again, a fork saver will prevent this by stopping fork compression.

3. A fork saver will let you apply more force to the tie down straps, letting you secure the dirt bike more firmly.

A fork saver can be bought, or you can make your own. I wouldn't recommend buying one as it's really easy to make your own from a 4x4 block of wood. Simply cut it to length, and place it between your front wheel and mudguard before strapping the bike down.

Now you know how to transport a dirt bike, you can find out how to pick your first bike in THIS FULL GUIDE.